On November 16, 2021, 10 bids pursuant to the RFP were received and reviewed. They came from firms in Alabama, Connecticut, Florida, New Jersey, Ohio, Pennsylvania, Washington, DC, and Maryland (2 from Baltimore the other from Chevy Chase). On January 11, 2022, Guide Studio (Cleveland, Ohio) was selected and the contract was approved to proceed. Over the next 9 months, a group of local steering committee members and a local group of community stakeholders was assembled and met with and interacted with Guide representatives to help shape the campaign’s direction. Guide also engaged the public and solicited their input through a pair of online surveys (March 28 & June 13). On August 2, Guide representatives hosted an open public meeting—specifically a Branding & Imaging Workshop—during which they presented the progress they had made on the campaign to that point. On October 25, the showing of a Branding Splash & Release video preceded the unveiling of the new logo by the Mayor and steering committee members at the Mayor & Council regular session.

The Branding & Imaging Campaign is Much More than a Logo …

While the timeline to implementation and release is an example of that in and of itself, there is still so much to do as marketing a municipality does not stop with the concept of an initiative and the creation of a new logo.  In today’s world, a municipality’s ability to make itself relevant is no longer a choice or a luxury.  It is now a necessity if it wishes to compete, grow, and prosper.  The City made a commitment to do just that through this campaign and ensure that we are not left behind.

The engagement and collaboration that succeeded in establishing our unique identity and telling the story Hagerstown has to tell sends a strong message that the community who lives, works, and chooses Hagerstown as its base cares deeply about it succeeding both inside and outside its corporate boundaries.  And the City’s commitment to rewarding that collective effort is best expressed through the following positioning statement.

The Branding & Imaging Campaign is Much More than a Logo …

In Hagerstown, our people are our foundation, and our lived experiences have fostered a reflective and resilient nature that drive us to build community through engagement and collaboration, without exception. People are drawn to our city’s rich history, beautiful downtown, housing options, amazing parks and vibrant arts and culture scene – fertile ground on which ALL residents and businesses can thrive.

As for the logo …

While it is the City’s first in 157 years, it remains loyal to Hagerstown’s history and fabric.

Heavily influenced by the many prominent bridges and architectural features found throughout the City, it also boasts some of their texture.  The colors were inspired by the Cultural Trail’s Mural of Unusual Size.  And the text, replete with a tinge of artistic flair to the font, is meant to be attractive, yet easy to recognize.

Additionally, different versions and iterations of the logo exist and will be seen and used when called for.  For example, a “half version” will be utilized to identify departments with the department name to be added underneath.  Also, while they do mute the vibrancy of the array of colors, other forms of the logo exist in solid colors (such as black and navy blue)

And, to be clear, no variation of the new logo “replaces” the original City Seal which will continue to be used in official capacities and for all formal applications. 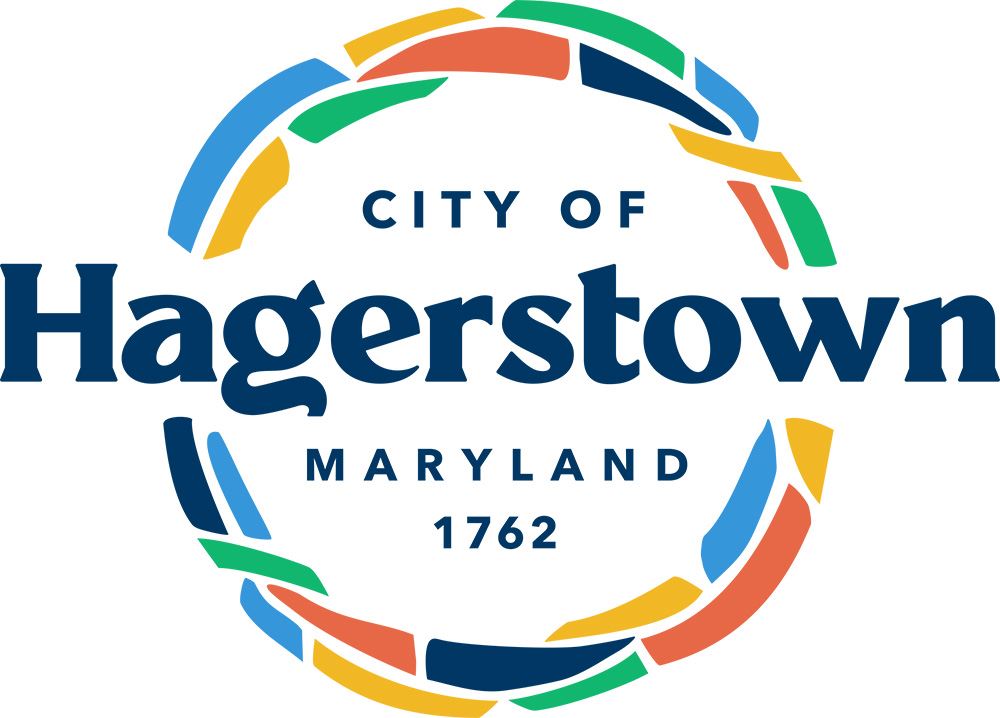