The City of Hagerstown, Maryland, has three sister city relationships.

The cities of Hagerstown and Wesel joined hands as sister cities by public proclamation on March 10, 1952.  These cities have continued to share this affiliation for the past 60+ years.

Devastated by the bombings from the U.S. Air Force in World War II, Wesel suffered 98% destruction of its town and the deaths of 600 of its citizens in a three-day period of time in 1945. Despite this suffering, the people of Wesel lived up to their honorary name of “hospitable Wesel” and reached out the olive branch to their former enemy — an enemy who ultimately brought peace and freedom to their country.

The process began in 1951 when Dr. Karl Heinz Reuber contacted Operation Democracy in New York to seek assistance in finding an American town that was suitable and willing to initiate a friendly relationship with Wesel. County Manager of Rees County, Dr. von Bonninghausen, also made personal contacts with Hagerstown while he was touring the United States. Mayor Mills of Hagerstown seized this gesture of friendship and responded positively to the official offer of the Mayor of Wesel, Nr. Ewald Fournell. By 1952 the pact was signed by both cities.

Since that time much has transpired and contacts between the two cities have expanded. To foster and promote the partnership, each city has exchanged activities and ideas such as the traditional “key to the city,” exhibitions to encourage an appreciation of each city’s people and culture, tours of the Fusternberg Men’s Choir, student exchange programs for high schools and even marriages — Sally Burhans, Mayor Burhans’ daughter, to Karl Heinz Buschmann.

Today, both cities continue to promote programs such as the Augustoberfest to celebrate the partnership of Hagerstown and Wesel. They realize the importance of friendship and understanding in achieving world peace. 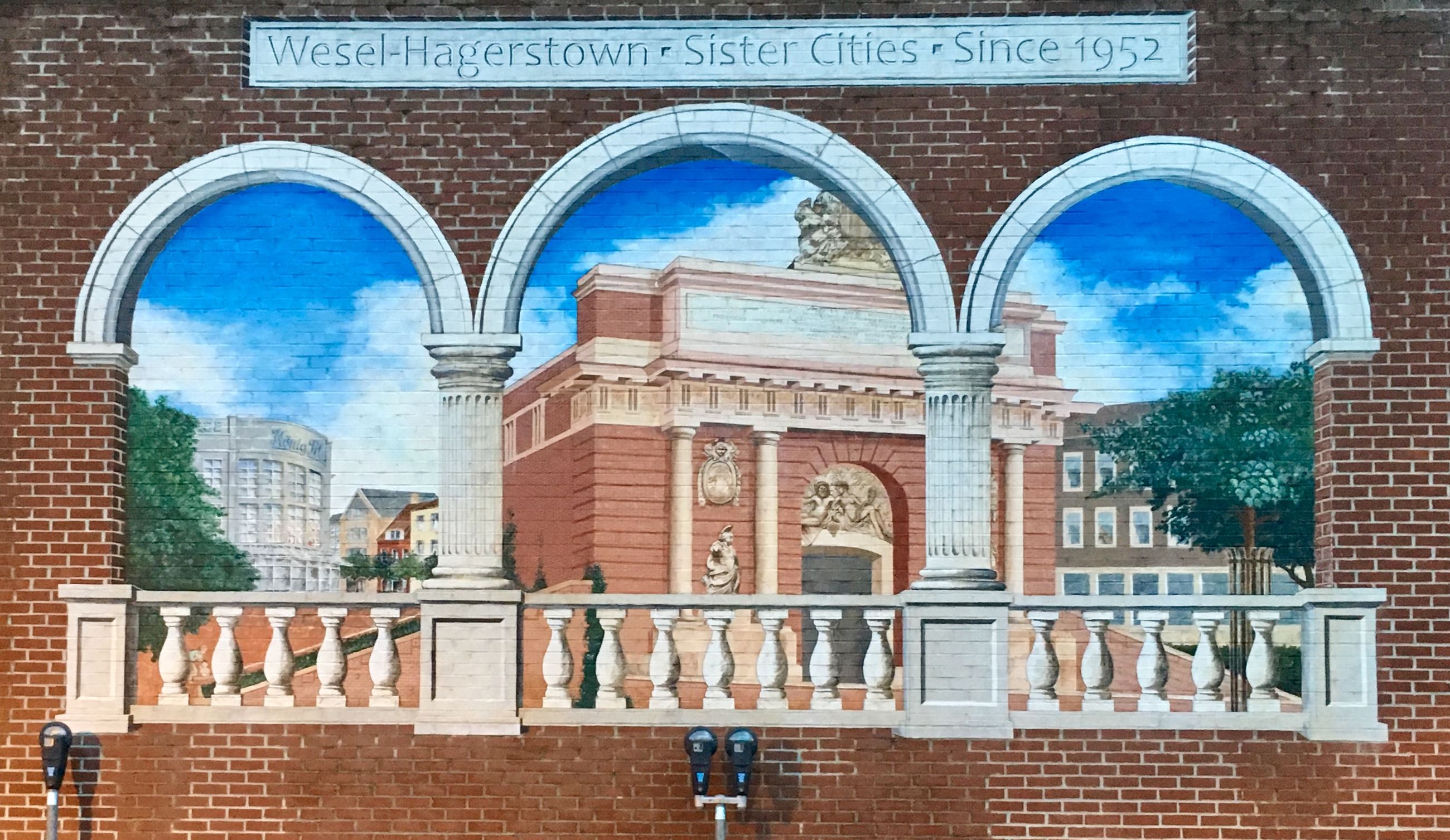 Above is the mural on Franklin St. depicting a view into Wesel, Germany.

Mr. Keifer was instrumental in gathering information on both towns and gaining support from both town officials to move forward in forming this relationship.

On October 1, 2013, Mayor David Gysberts signed a Special Recognition Certificate recognizing the Sister City Partnership between the two towns of Hagerstown.  This Sister City Partnership will provide cultural exchanges and friendship among the citizens and businesses of both cities.  These two municipalities goal is to share history, friendship, appreciation of the arts and culture, along with the features and benefits of living in such interesting and dynamic locations.  This Partnership will also reinforce connections, past and present, between the two cities and be a benefit to both communities.

Xinjin County is under the administration of Chengdu, the capital of the Sichuan province, China, and delegation members of Xinjin visited Hagerstown in September of 2015 to collaborate on education, tourism, health industry and organic agriculture.  This cultural exchange reinforces connections, past and present, between Hagerstown, Maryland and Xinjin County, China and is a benefit to both communities.