Cause of Fatal Fire Released

The Hagerstown City Fire Marshal's office has determined that the October 24, 2017 fire at 20 Snyder Avenue Hagerstown was determined to be an accidental cause. The 3:31am fire resulted in the death of Debra Kegarise (age 62) and her son Tyson Kegarise (age 41). The fire caused extensive damage to both sides of the duplex house and a vehicle in the driveway.

Firefighters were able to quickly extinguish the fire which followed by a search of the building for the occupants; both were located on the second floor of the home along with two family dogs. 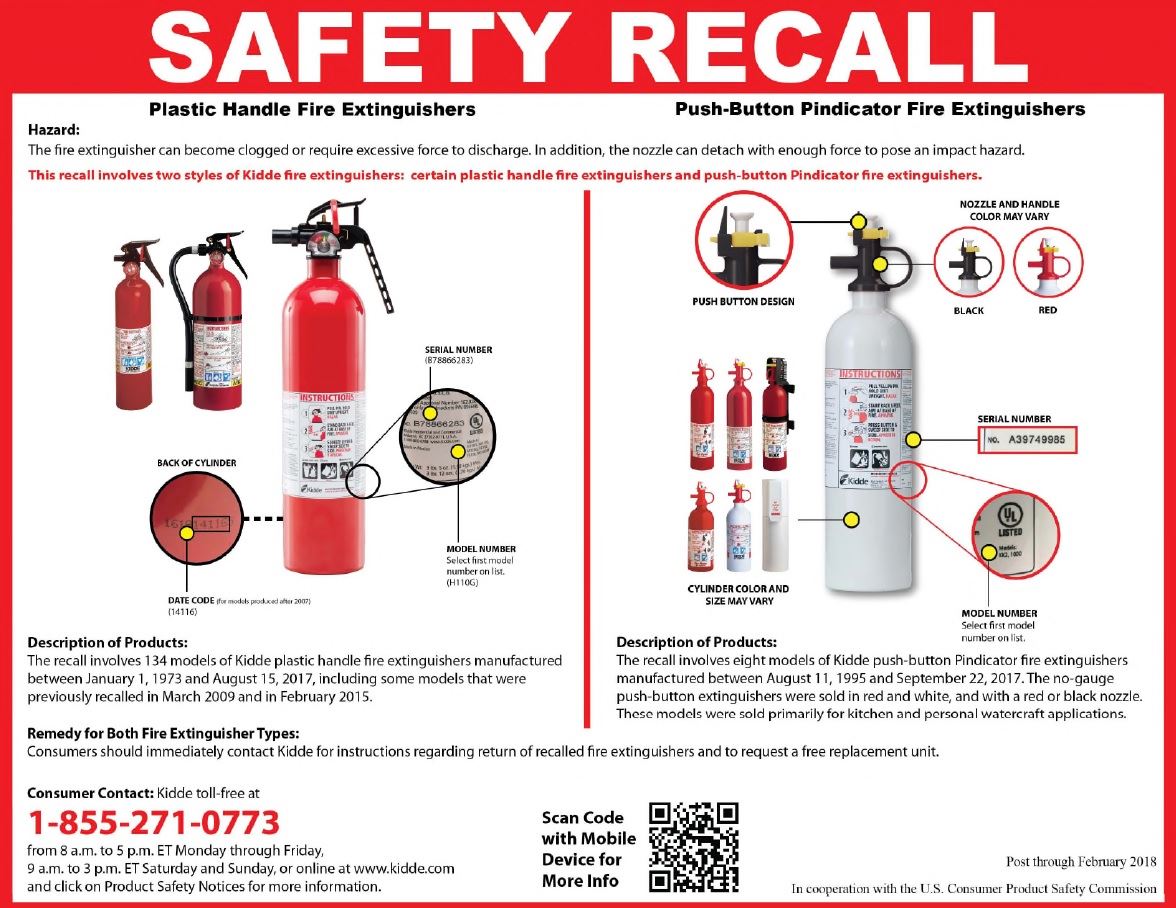 The fire extinguishers can become clogged or require excessive force to discharge and can fail to activate during a fire emergency. In addition, the nozzle can detach with enough force to pose an impact hazard.

The State Fire Marshal would like to remind Maryland residents and visitors that using aerial luminaries, commonly referred to as “Sky Lanterns”, is prohibited throughout the State.

"The quick recognition of the potential hazard with these devices by Mr. Ciampo, and his decision to immediately contact local authorities was absolutely appropriate in this incident", stated Chief Deputy State Fire Marshal Gregory Der. "This serves as a positive reminder to all members of the public of the National message, "See Something, Say Something". 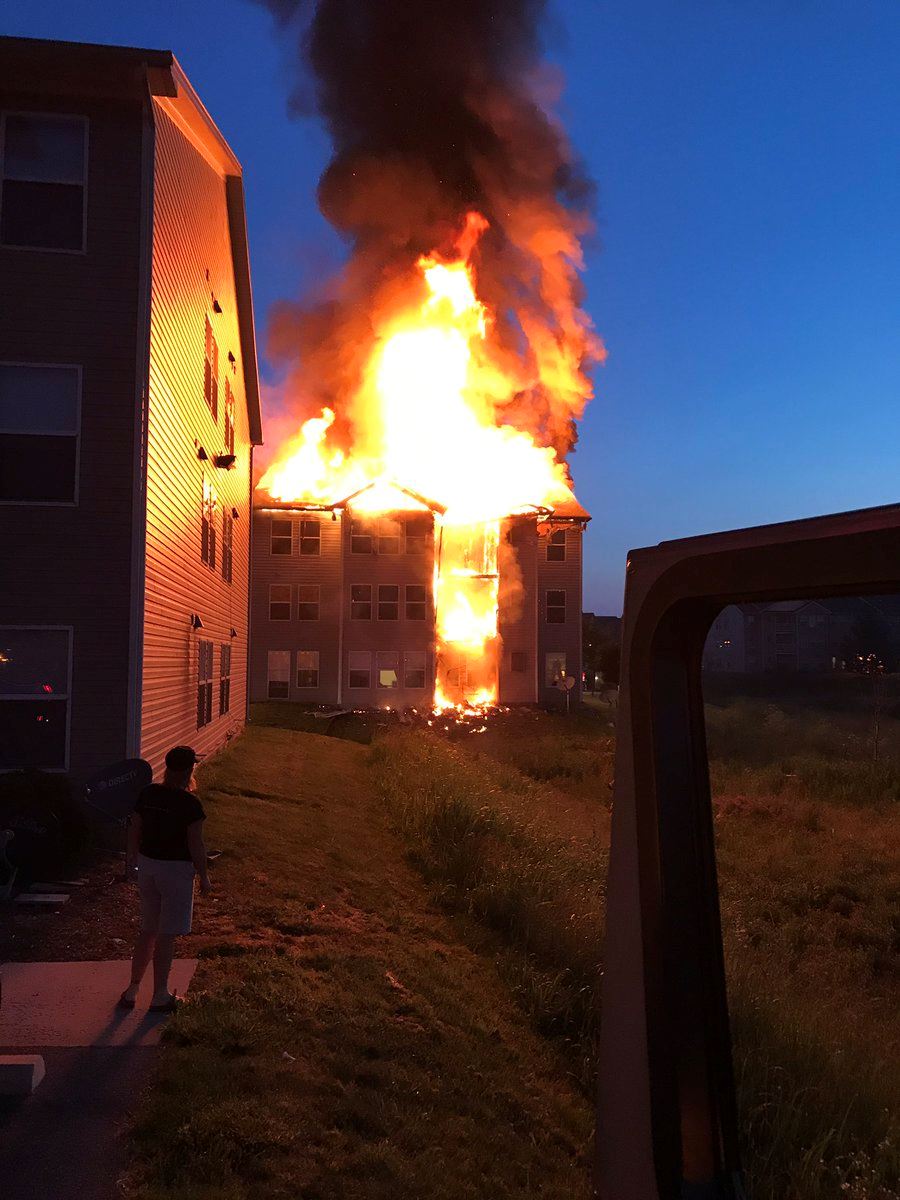 Shortly after 5 am on Monday, June 12th, the HFD and Long Meadow VFC were alerted for an apartment building fire in the Cortland Apartments complex. It didn't take long to know the event was a significant working fire as multiple calls were made to the 911 center.
The picture to the right shows conditions as units arrived on scene. BC 2 immediately requested a safety dispatch and a second alarm. The fire was well progressed in spaces not protected by the buildings sprinkler system.
In total, 46 occupants were displaced along with numerous family pets. The Fire Marshal's office continues to investigate.
Official Press Release

The victim in the January 11, 2017 fire above the old J&M Grill on S. Potomac Street, Hagerstown has been identified as Francisco Louis Albright, age 41, the sole occupant of the apartment located above the business. “Albright died of smoke inhalation as a result of a fire in the apartment’s kitchen” according to Doug DeHaven, Hagerstown Fire Marshal.

Hagerstown Fire Marshal's were called to the rear of an apartment building in the unit block of E Washington St on the morning of Dec 31 for a reported suspicious package. The package appeared to contain items that could be used to construct a destructive device. No injuries were reported and the package was rendered safe by the Maryland State Fire Marhsal Bomb Squad.
Official Press Release

A vehicle fire in the 400 block of E Washington Street Hagerstown on Wednesday January 11 has been determined by Hagerstown Fire Marshals to have been intentionally set on fire. Hagerstown Fire Department units responded at 7:35 pm for a vehicle on fire. Units arrived to find that a bystander was able to extinguish the fire which involved a 2015 Ford box van owned by Budget Truck Rental.

Anyone who may have information on this fire is asked to contact the Hagerstown Fire Marshal’s office at 301-790-2476 or email at firemarshal@hagerstownmd.org.

Full Story from the Herald Mail.

On October 6, the Hagerstown and Maugansville Fire Departments were alerted to a fire in an apartment at the Reserve at Collegiate Acres apartment complex on Buckeye Circle in Hagerstown. Responding units arrived to find the buildings fire alarm system activated and occupants evacuating the building. Occupants reported a fire in a 2nd floor kitchen apartment which had been extinguished by the buildings fire sprinkler system. Fire Department units checked that the fire was fully extinguished, shut off the sprinkler system, and worked to contain the remaining water.

On October 5, HFD units were alerted for a possible apartment fire at Potomac Towers. While en route, Truck 1 observed a dumpster on fire to the rear of a business in the 300 blk of the Dual Highway. During the investigation, witnesses and area video footage were able to identify a Waynesboro, PA man as the culprit for the fire. John R Wolfe was subsequently charged for the blaze.
Official Press Release 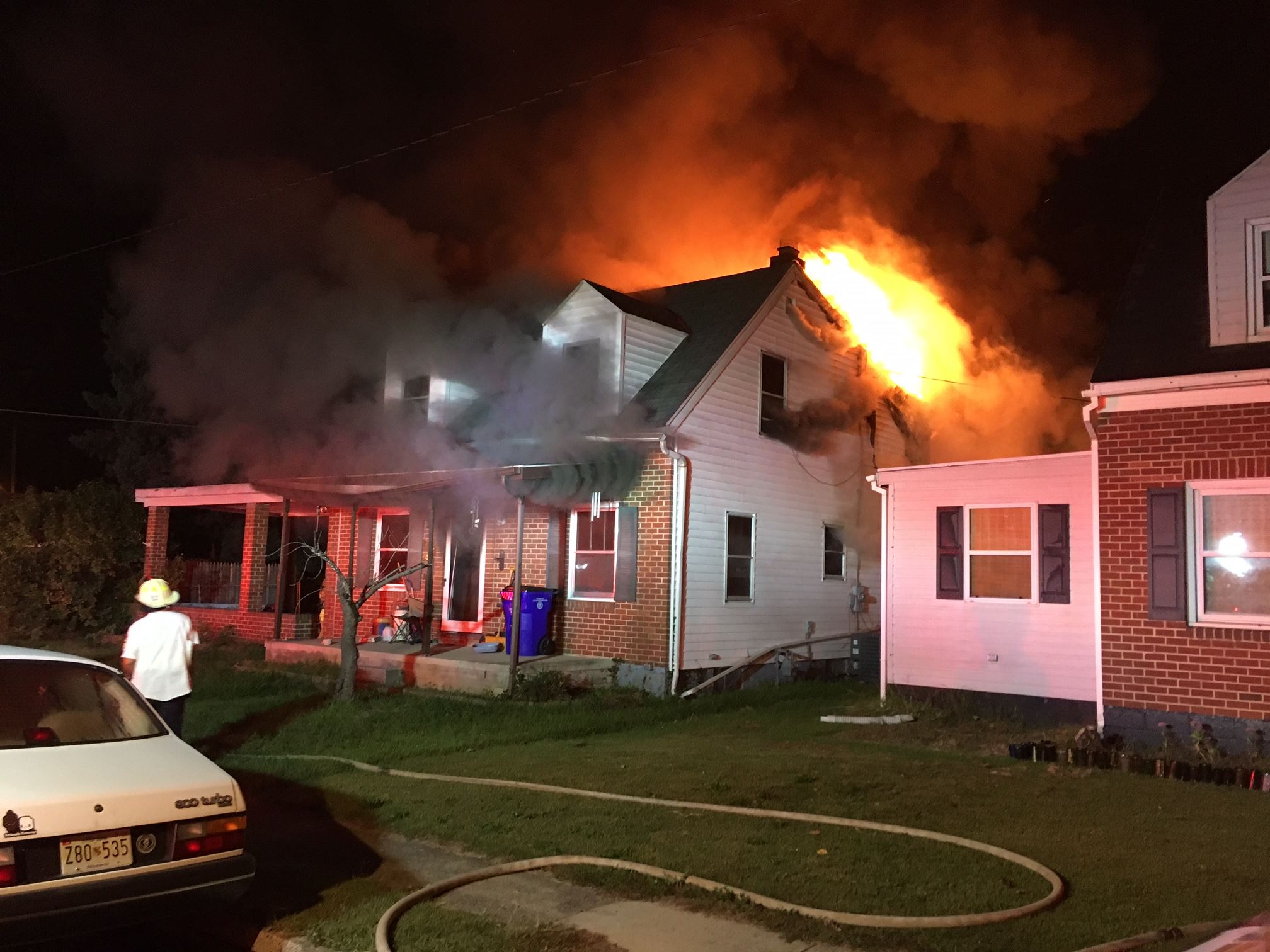 At approximately 5:10 am on October 5, the Hagerstown Fire Department was alerted for a house fire on Radcliffe Ave. Units arrived to find heavy fire to the rear of the house with reports of people trapped. The two occupants who were home at the time of the blaze were able to evacuate after being awoken by their smoke detectors.
This incident is further proof of the significant benefits working smoke detectors on each living level of your home can have on your personal safety. If you need smoke detectors or aren't sure if yours work, please contact us at (301) 790-2476 or by going to the "Request a Service" tab.
Official Press Release

At 6:20 pm, Tuesday, August 16, 2016 the Hagerstown City Fire Marshal was requested to respond to the 200 blk of Nottingham Road after Hagerstown Police officers handling a domestic incident discovered what appeared to be military ordinances in a house. A response by the Maryland State Fire Marshal Bomb Squad was requested and the area of the items was secured until the items could be removed safely.

The State Fire Marshal Bomb Squad removed the items from the home without incident. They will be continuing their investigation into the origin of the devices. No evacuation of the area was necessary and no injuries occurred during the incident.

The Hagerstown City Fire Marshal's have charged a 31 year old female with intentionally setting fire to her Avalon Ave home. The fire occurred in the early morning hours of July 8th with her children sleeping in nearby bedrooms.

Units arrived to find smoke in the house. Fortunately a passerby assisted in getting the multiple children in the residence out before firefighters arrived. Hagerstown firefighters conducted a rapid search of the residence, locating the female and removing her to safety where she was cared for by a Community Rescue Service medic unit. 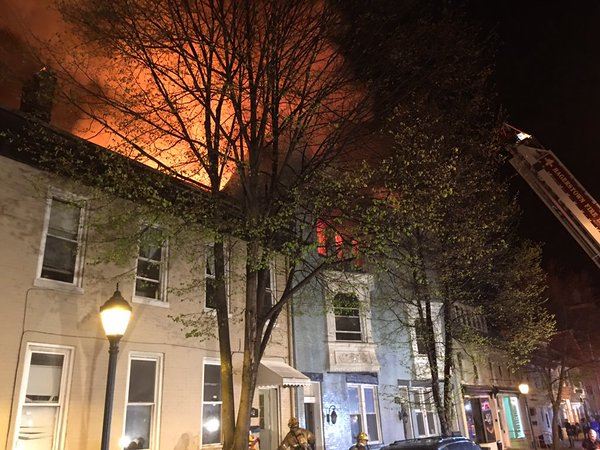 The Hagerstown City Fire Marshal's Office continues to investigate an intentionally set fire at 44-46 E Franklin St. City companies were alerted for this fire on the evening of April 18th and required assistance from multiple Washington County fire companies to bring the 2 alarm fire under control. This property was also the scene of a fatal 2 alarm fire in 2014.

Anyone with information on this fire should contact the Hagerstown City Fire Marshal's Office at 301-790-2476 or by firemarshal@hagerstownmd.org.