Visit the refurbished home of Hagerstown's founder, Jonathan Hager, built circa 1739. This one of a kind house museum is staged with historic furniture and artifacts. Take a guided tour of the restored limestone homestead fortress built over a never-failing spring for an authentic educational heritage experience unlike any other. Located at 110 Key Street in Hagerstown City Park in Washington County, Maryland.

Beginning Saturday, June 6 - Tours Available by Appointment Only
Tours are available on Fridays & Saturdays during regular operating hours, 10am – 4pm.  Other tour times may be requested.
Make your tour reservation by phone by calling 301-739-8577 x 170.  A 48-hour notice is required.
Tours must be pre-paid over the phone in advance. Group sizes will be limited to 5-6 people, preferably only one household at a time. Visitors must wear masks and practice social distancing and safe hygiene while on premises.   The tour will discourage touching any objects other than hand rails and doorknobs.
Admission: $5 adults; $3 seniors (62+), students (13-17) & Military; $2 children (6-12); free 5 & under
Check out our Virtual Programs in June: 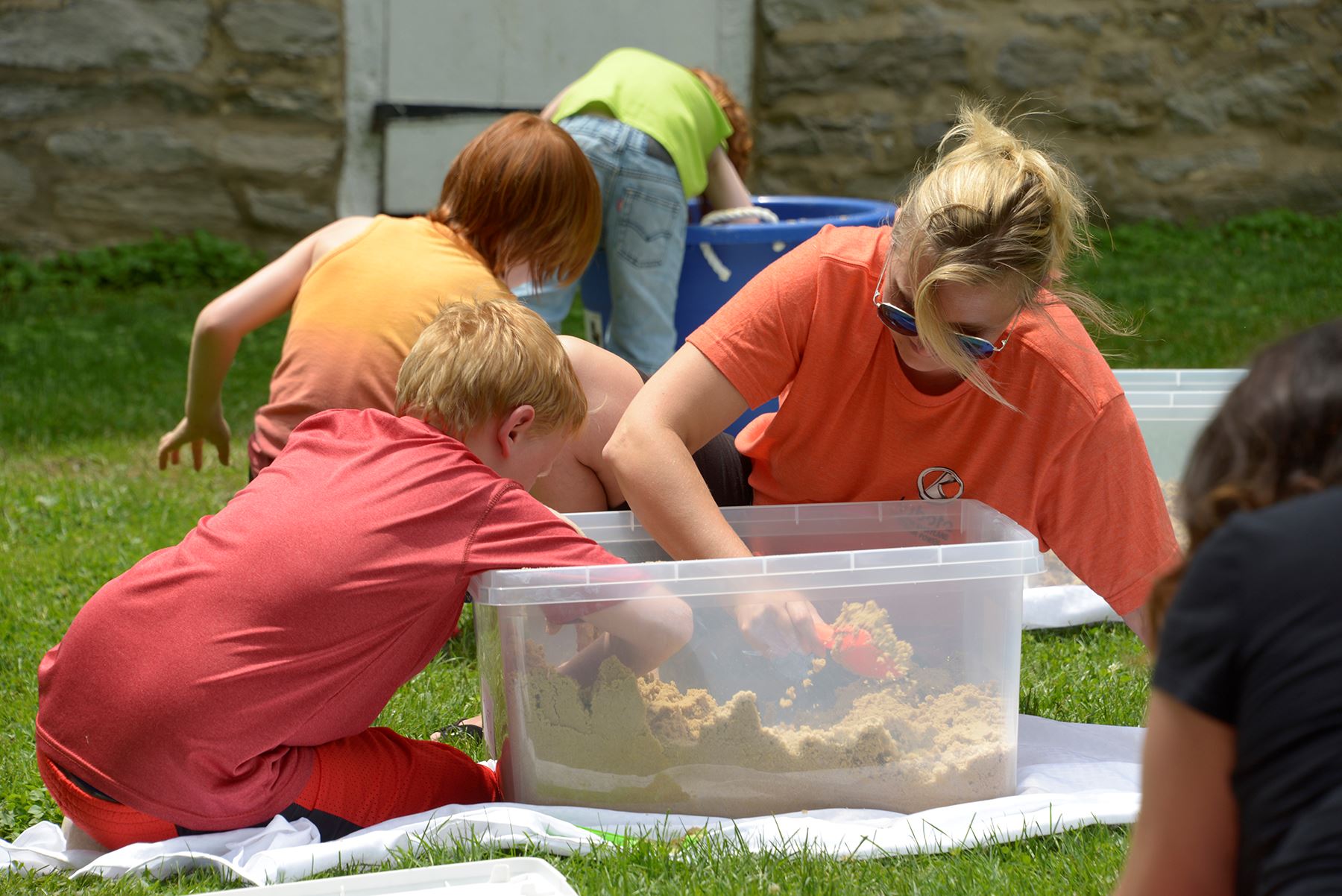 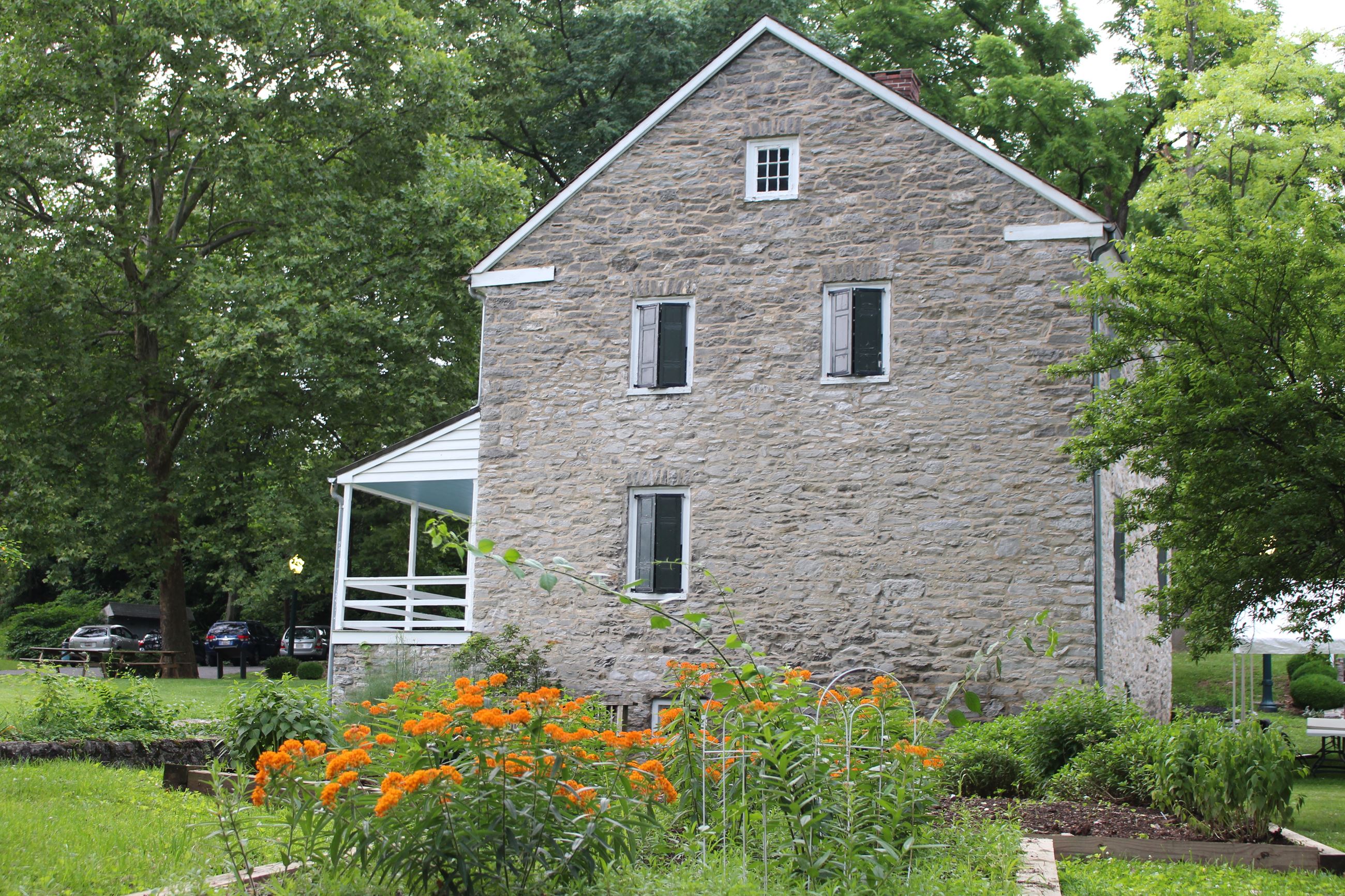 On June 5, 1739, Jonathan Hager purchased 200 acres of land from Daniel Dulany for 44 pounds. He dubbed his tract "Hager's Fancy." With the location carefully chosen over cool spring water, construction of the now 3 1/2 story home began. In 1740 Hager married German neighbor, Elizabeth Kershner and presented her with the new house.  The new home must have evoked many pleasant memories for the Hagers. Styled in the German tradition, the large central chimney added warmth to the stone structure, while a fill of rye straw and mud between floors and partitions served as insulation against the cruel winters. During the summers, the family could retreat to the cellar where the spring water provided coolness as well as safety and convenience. The Hagers must have been comforted by their home's twenty-two inch walls which stood firmly against man and nature.  Structurally impregnable, with a protected water supply, Hager's home served as a frontier fort in case of Indian attack.  The Hagers lived at "Hager's Fancy" for several years. During that time, Jonathan grew prosperous. He opened a trading post within his home as he continued to acquire land. On May 8, 1745, "Hager's Fancy" was sold to Jacob Rohrer for 200 pounds. The house remained within the Rohrer family until 1944. At that time, it was acquired by the Washington County Historical Society under the leadership of Hager historian Mary Vernon Mish, the house was restored to its former colonial beauty. It was presented to the City of Hagerstown in 1954. In September 1962 the home was opened to the public on the bicentennial anniversary of Hagerstown.  Today the Hager House is now completely outfitted with authentic furnishings of the period. It depicts a life long since forgotten. Not many American cities older than the country itself can present the homes of their founders completely restored. Hagerstown Maryland, has been given such a gift-for stepping into the Hager House is like taking a walk through the past.  Evincing leadership from the moment of his arrival in Western Maryland, Hager quickly became a leading citizen. He was involved in many activities: farmer, cattleman, even a gunsmith. Hager was a volunteer Captain of Scouts during the French and Indian War. In 1762 he founded Hagerstown and in 1771 and 1773 he was elected to the General Assembly at Annapolis, qualifying him as the first German to make his mark in politics.  On November 6,1775, Captain Hager was accidentally killed while supervising the building of the German (now Zion) Reformed Church on land which he had donated. At the time, he was serving on various critical pre-Revolutionary War Committees. Hager has been called the "Father of Washington County" due to his having laid the groundwork for its separation from Frederick County in 1776 and the subsequent creation of Hagerstown as County.
Situated in Hagerstown's City Park, the Hager House is built of uncut fieldstones carefully fitted by the young German immigrant who had traveled to the wilderness of Western Maryland in search of adventure and possible fortune. Jonathan Hager had arrived on the shores of the new colonies in 1736, debarking at the Port of Philadelphia. Eventually, he chose to make his home in Maryland, where Charles Calvert, proprietor of the colony, was offering cheap land to those willing to settle in the western frontier. Many immigrants turned back, but Hager refused to be discouraged.
Jonathan Hager House Ornament
Give the gift of Hagerstown history! Add a commemorative Hager House ornament to your collection. This custom-cut brass-etched collectible is available for purchase for $17 (includes tax) for pick up at the Jonathan Hager House Museum at Hagerstown City Park or from the Parks & Recreation Office at Fairgrounds Park.  Click here to order.
To have an ornament mailed to your home address, add $3 for shipping. Call: (301)739-8577 x 170 for help with ordering an ornament. 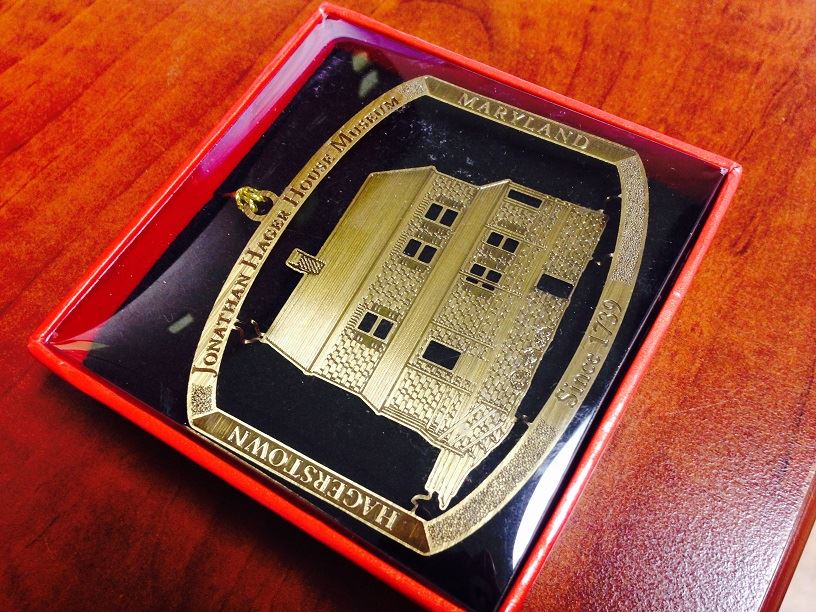 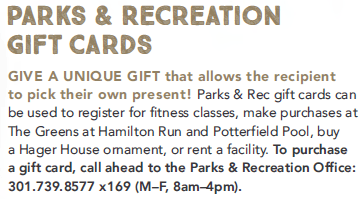